Santa Cruz  is probably the richest quarter in legends and, surely, one of the most beautiful. A labyrinth of narrow streets, tranquil plazas, and houses with beautiful patios covered in flowers.

Santa Cruz neighborhood of Seville was the home of the Jewish community, along with the adjacent neighborhood of San Bartolomé. Among its members were major traders, treasurers, doctors, and artisans. After their expulsion, the neighborhood declined until it was restored in the nineteenth century and recovered its original essence.

In one of the many corners, there is the Plaza de Doña Elvira, formerly a Comedy Corral where well-known writers introduced their first work. Or the Plaza Santa Cruz, to which the neighborhood is named after and where a beautiful wrought iron cross is surrounded by a stunning garden. Do you know who is buried beneath that cross?

If you dare to get lost inside the quarter, you will discover large sevillian patios covered in flowers; or narrow streets like the callejón del Agua, beside the Alcazar Walls. If that weren’t enough, in a city chosen as the setting for over 100 world-renowned operas, Santa Cruz was one of the preferred backdrops of composers and librettists alike.

For all of these reasons, we suggest getting lost within the streets and squares of the Santa Cruz quarter. Breathe in the history and romance that emanate from every corner.

Discover the ancient jewish quarter of Seville in the evening thanks to our Santa Cruz quarter free tour. Or, if you prefer, include this place in your own experience on foot with a private tour guide in Seville. 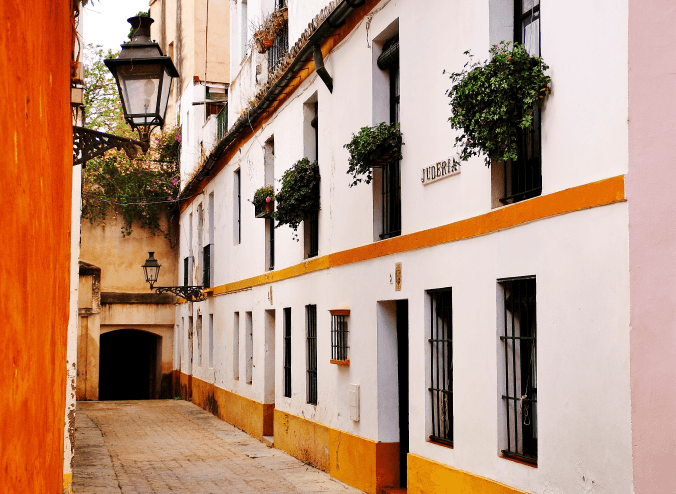